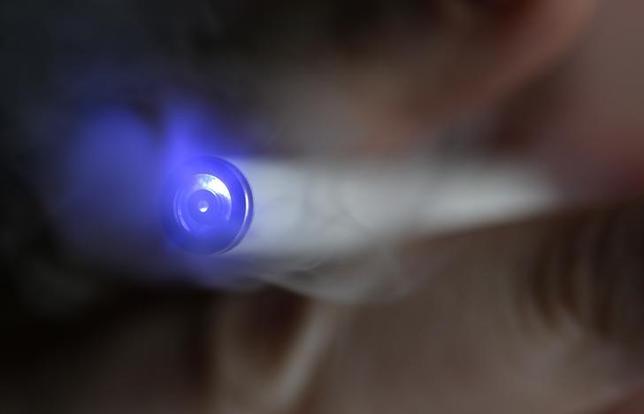 A man uses an E-cigarette, an electronic substitute in the form of a rod, slightly longer than a normal cigarette, in this illustration picture taken in Paris, March 5, 2013.
Reuters/Christian Hartmann

A White House office deleted language in a recently introduced tobacco regulation that would have removed flavored e-cigarettes from the market until they had been authorized by the Food and Drug Administration, an edited version of the document shows.

On May 5, the FDA announced a final rule extending its tobacco authority to include e-cigarettes, pipe tobacco, cigars and hookah. The rule becomes effective in early August. Under the rule, companies must seek marketing authorization for any tobacco product introduced after Feb. 15, 2007.

The rule gives manufacturers a grace period of up to two years to submit marketing applications, during which they can continue to sell their products. They can sell them for an additional year while the FDA completes its review.

As submitted by the FDA to the White House Office of Management and Budget, the rule gave a grace period for flavored products of only 90 days after the rule became effective.

Public health advocates have long called for flavored tobacco products to be banned, saying flavors such as bazooka Joe Bubble Gum and Cotton Candy are designed to appeal to children.

A White House spokeswoman, Emily Cain, said the OMB “does not comment on changes made during the interagency review process.” The FDA also does not comment, FDA spokesman Michael Felberbaum said.

In its originally submitted rule, the FDA said it recognized that numerous flavored products would come off the market within 180 days of the rule’s publication “and that this will significantly impact the availability of flavored tobacco products at least in the short term.”

But it said the move was important because tobacco products with characterizing flavors, including menthol but excluding tobacco flavor, were attractive to young people.

“FDA made an overwhelming scientific case to OMB,” Matthew Myers, president of the Campaign for Tobacco-Free Kids, said in an interview. “For reasons that are not articulated, those people substituted their own judgment.”

“We are deeply troubled that these important safeguards were stripped in this way when FDA repeatedly demonstrated that the science shows flavored products appeal to youth and young adults,” Harold Wimmer, president of the American Lung Association, said in a statement.

Proponents of e-cigarettes say the products can help people quit smoking and that flavors are a crucial element of what makes them attractive to adults seeking to quit. The FDA said in its original rule that evidence supporting such claims “is thus far largely anecdotal.”